This week I happened upon the TLC program “Extreme Couponing“.  I seriously had no idea it existed, but was so intrigued by it as I sat there watching it.  It was so mesmerizing to watch how an $1100 grocery bill can be reduced to $50 or a $5000 retail value to $250.  That’s really something I simply can’t wrap my head around and I suppose that’s why it’s called “Extreme Couponing”.

I’m not sure if I can take my measly coupon shopping to that extreme, but I am enjoying saving money thus far.  I’m almost embarrassed to show you my three-shelf stockpile compared to the garage-full bounty these Couponers have stored.  They seriously had more items stocked than a typical mini-mart or even mid-size grocer!

I do appreciate though how the @KrazyCouponLady shared how she came to realize the importance of her stockpile when her husband lost his job and they were forced to literally survive and eat from their full pantry, otherwise known as their garage.

I mean really, it totally makes sense to buy items as the lowest price possible rather than the full retail amount.  I’d much rather spend $1 on an item rather than $5 or even better than that, get it for free!  And in these last couple of weeks I’ve learned to do just that!

In these last two weeks alone, I’ve literally saved more than I spent.  I do feel I’ve spent wayyyy more than the Pro’s would ever spend, but I also realize that I’m still in the learning phase of couponing and still a mere babe growing and learning this strategic game of coupon shopping.  For the amount of money I’ve spent though, I have tripled the amount of items that I would have bought on a regular grocery shopping day.

The norm has always been to go to the grocery store every two weeks, spend an ungodly amount of money on what seemed like nothing, run out of everything in two weeks or less and then go do the same thing over again spending that same amount of money with each visit.  And then, if you’re anything like our family, it seems we never have anything to eat!  How many times have I left the grocery store and went through a fast food drive-in on the way home!  Ridiculous!

But now…..with that same (or right now, still less) amount of money I’ve spent, I have enough of certain items stockpiled away that will last a good two to three months.  So, pa-lease someone tell me I’m doing it right!!  Because self doubt has its way of sneaking in, I keep going back and forth to look at my ever-growing stockpile as if were actual trophies sitting there on those shelves.

Since I’ve been coupon shopping, I currently have on hand:

I think that’s it…I may have left out a few things!  😉

Another crazy thing I’ve learned is since my Debut post where I mentioned that CVS is the most expensive of stores, it has become my favorite!  I save more in there than anywhere else and it has become my new grocery store!  🙂

I still have a few bargains on my list I’d like to stockpile, but so far I think I’m doing pretty good!  One thing this has forced me to do is to actually eat what we have on hand…whether it be the last of the pantry items that’s always forgotten about (’cause we usually run back to the grocery store by then) and become a more diligent shopper when I’m actually buying food items or what I consider actual “grocery” items like meat and menu items, etc.  I’m spending lots less at Walmart and still have dinners to prepare during the week.

Yes, I’m making more trips to several stores during the week, spending a few hours a week organizing my coupons, clipping coupons and making my lists, but for me it’s been totally worth it and I’m having fun doing it. 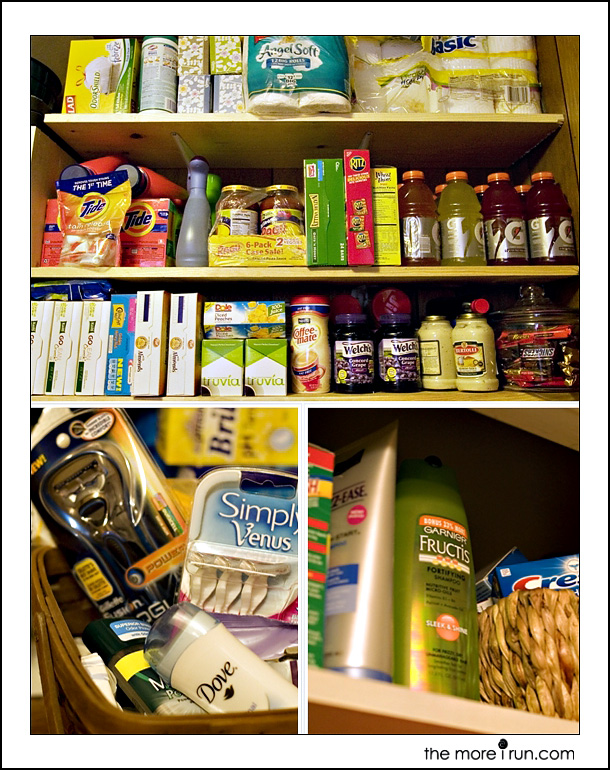