When I first started running (or attempted to run, rather), I browsed at running magazines, read the stories of obsessions with running races and would quickly put the magazine down….thinking how that didn’t interest me and I didn’t see myself ever officially running a race.  But the more I read, the more I became interested and wondered if that was something I could actually do.  ‘What an accomplishment’, I thought, ‘at my age’…  Not that I’m ancient by any means, but the age group of young people I had been reading about-on blogs and in magazines-are several years younger than me–some alot younger than me.  An accomplishment I thought would mean something to a newbie runner, just running her first race at the ripened, older age of 41.

So there began my search.  My mom (at the sweet age of 62) has run/walked several 5K’s so she was my primary resource.  She directed me to active.com where you can search for pretty much any race, any where.  Coincidentally enough, there was a local race only 10 miles from home.  So, guess what I did?  Signed us up.  🙂

I didn’t really get nervous about it then as I signed up way in advance and knew I had a while to go before race day.  So I just continued to do what I had been doing and that was to simply run.  I did continue reading other running blogs and Runner’s World Magazine to learn more technique and to gain advice on running races, especially running a first race.  Looking back on this now, I realize that this was valuable to me in helping me run my first 5K.

As Clark and I ran each week..averaging about 8-9 miles per week, I experienced some easy days, but also harder days.  Becoming frustrated is simply an understatement on how I felt at times….even 3 days before race day I didn’t think I could do it.  The more I huffed and puffed and ended up walking more than running, the more I thought “what in the world am I thinking?” or “there is no way I can do this”.  The more this happened the angrier at myself and at running itself I became.  It seemed I could hit the 2 mile mark and simply give out and have to stop and walk.  I wanted to run a 5K, not walk it.  And that was what I was determined to do.

I had to learn that I would reach a brick wall with each run and would have to break through it.  I learned that so much of this game is mental and I mentally had to win that first….while all the while, hoping my body would follow.  I learned that if I stuck with it and ran through the wall, that it would become easier on the other side.

This is where all the info I had been reading became so useful…I learned how to position myself..physically..to help me breathe, how to carry myself and my posture, how fast or slow to run, and even how to place my feet and how quick my steps needed to be.  This helped me to prepare for the obstacles along the way and how to overcome them.

As far as “training” for my first 5K, I’m not sure if that’s what I should call it.  I mean, it sounds so official-like…whereas I don’t feel official by any means.  I’m just a girl who runs….with her husband….on a dirt road…where the only ‘traffic’ we meet is the tractor in the peanut fields.  I’ve never called myself a runner before and it seems to me that I’m just running a 5K; it’s not like it’s a marathon or anything like that.  But all the same, according to my reading materials, I did try to follow a few simple guidelines including those I mentioned above: breathing, posture, and pacing, etc.  The week of the race I also tapered back the distance I ran so not to fatigue my legs too much just before the big day.  I also only ran 2 days that week with the first run on Monday at 3 miles and the other on Thursday running only 2 miles.  This was also a benefit come race day.

Race Day
Can you say freaking out?!  Hahaha.  If you follow me on Twitter and Facebook, you’ll have read where I said I was as nervous as a cat in a swimming pool!  Again, thoughts flooded my soul, “why did I sign up for this, you idiot!?”.  I mean, seriously, I had never run in front of anybody but Clark….and did I mention only on a dirt road?.?.?

Okay, breathe….I had a plan and I would stick with it.  Race was to begin at 8:30 and we wanted to arrive by 8.  I had picked up my race packet the day before and had driven the course as well.  Yes, can you say loser!?  Hey!  Knowledge is power and I wanted to know every detail of where I would be running.  I had my clothes laid out and my alarm was set for 6:00.  I wanted plenty of time for my morning coffee and breakfast.  I finished breakfast which was my go-to breakfast/lunch/anytime snack of peanut butter toast with sliced apples.  It’s filling and full of protein and carbs.  I also popped a few of these snacking on my last one at 8 (I wanted to be finished with everything at least 30 minutes before starting).

As we took to the starting line, I was already breathing heavy and trying to calm myself down and focus.  Advice I had received and read was don’t start out to fast or you’ll tire quickly and struggle to the end.  Slow and steady wins the race became my mantra.  I repeated it over and over to myself.  And so we began.

Clark was naturally ahead of me as he runs faster and other than Mom taking up the rear, I was last.  Yes, last.  That was extremely intimidating, but I had to stick with my mantra.  My only goal (other than the obvious desire to finish) was to run the entire race.  As everybody quickly ran out of site, I tried to keep my pace steady and stay focused.  It wasn’t long before I began to pass other runners who were starting to slow down.  I soon began to tune all of that out and just concentrate on my own pace and remember that I was doing this for me and for me only, so what everybody else was doing was really insignificant.

The first mile actually went pretty smoothly.  My pace was steady and I felt good.  I was having fun.  The second mile, I slowed down abit, but tried to keep my pace steady.  I was fearful of tiring too quickly and I seriously wanted to run across that finish line!  By the third mile, the adrenaline kicked in even more and my pace became faster.  I actually became excited!  The race benefited the local ARC and it was very touching for its members to stand on the sidelines to cheer us on!  Again, other than Clark I’d never had anyone cheering for me and I felt like a professional running the Boston.  🙂

My official time was 32:41…slow compared to others, but it was actually a personal best for me.  At home, I had been running my 3 miles anywhere from 34-35, so it was a pleasant surprise to run it that much quicker.  It was also a surprise to learn that I had placed 3rd in my age group of women.  I also wonder if there were only three of us competing in my age group, but nonetheless, I feel pretty good about my finish.

I know this is all pretty silly and sounds like I should have been preparing for and running a marathon, but I suppose to me, in my little neck of the woods dirt road, it was. 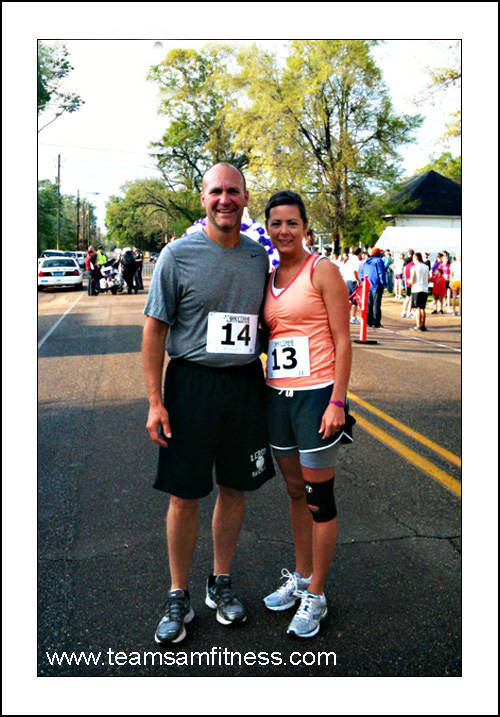 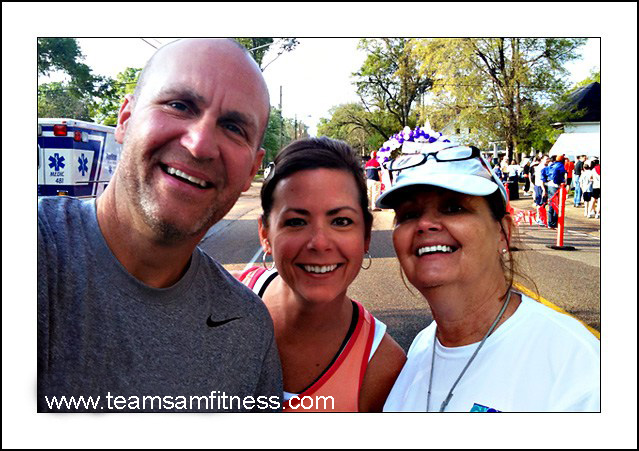