I’m not sure if it’s the aesthetic or a simple case of Obsessive Compulsiveness that causes me to neatly arrange and organize my couponing stockpile.  But when I do, I sit back and stare at it as if it’s a treasured trophy from a national championship game or an Olympic gold medal.

I suppose in a way it is some sort of game trophy.  After all, I do strategically work out a game plan, write out all of the plays and carry it out all the way to the end zone or finish line.  And I have a nice trophy (a.k.a. stockpile) to show off because of my effort.

Since joining the game better known as Extreme Couponing back in February, it seems that more and more people want to play.  I frequently find myself sharing what I’ve learned about coupon shopping to friends, acquaintances and co-workers on a regular basis so I thought it only appropriate to share it with you, too.

I definitely don’t qualify as a Extreme Coupon Shopper, but I have had fun trying, learned a lot more about it since joining the game, and have hopefully saved a little bit of money without just simply getting my uniform dirty.

This is what I’ve learned so far:

*Tip # 1. You must totally change the way you think about coupon shopping.
This was my first mistake and the most common mistake I hear as I talk to other shoppers about using their coupons.  “I just don’t see how using a few $.50 coupons at XYZ Store can save me any money”.

I had the mindset that I make out my grocery list just as I normally would every two weeks, hand my three-five coupons to the cashier, and save maybe $3.00 on my grocery bill.  Boy, was I wrong!

NOW, I plan out my shopping list according to what is in the sale paper(s)….not the previous, other way around.  Re-read that statement as that is a quintessential factor in coupon shopping.

*Tip # 2. You cannot be brand-specific.
Another very, very common mistake…another one that I also made myself. “I just can’t find coupons for things I use”.  Again, change the way you think and you’ll hit the playing field in no time!

Now there are a few items that I won’t waiver from and that’s okay….I’ll hold on to those coupons to the last possible minute (before they expire) and wait for that particular item to go on sale.  If not, I’ll buy it **gasp** at full price…it is what it is.  BUT, for the most part I’ve stepped out and have tried and bought other brands and have been completely satisfied.

*Tip # 3. Know the regular price of the items you buy.
This didn’t take me long to figure out when I first started and was buying things I thought was on sale, but could have bought them a full price and cheaper at another store.

I began by saving all of my store receipts and then wrote down everything in my handy-dandy notebook that I keep in my purse/bag.  Now I have an easy reference when I question if a product is truly a good buy or not.

And speaking of notebooks, keep one with you for jotting down sale items, shopping lists, shopping scenarios, etc.  It’s a must for me. 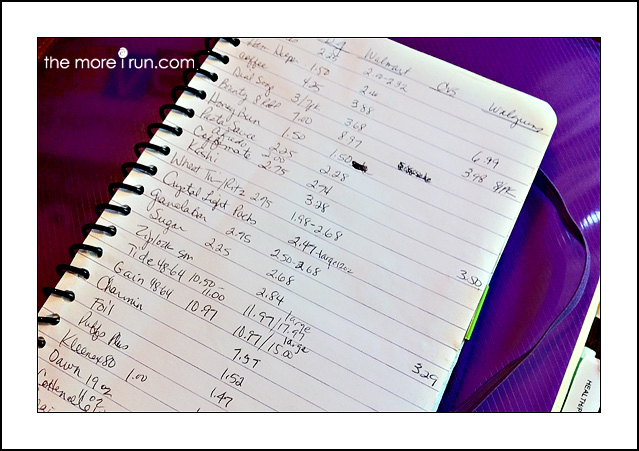 *Tip # 4. It’s okay to be an Un-Extreme Couponer.
This one has taken me a while to accept.  Not that I wouldn’t want to be one of those shoppers on TLC’s Extreme Couponing, but I’m learning that that’s not who I am or what I have time to do.  I’m happy for those couponers who can extreme shop like that, but I just simply don’t have days to spend working on my coupon binder, nor eight hours in one shopping trip at the grocery store.  I just want to save what money I can on my grocery bill…..and who doesn’t want to do that, right?

It also doesn’t make sense for me to buy 60 bottles of mustard just because I may have 60 coupons for them, BUT….I will buy the amount I need to keep about a three months supply.  I may eventually try stocking for a greater period of time–six months or maybe even a year’s supply, but for now less than six months is working for me.  I’ve found that a lot of item’s sale cycle is about three months, so I can re-stock then as needed.

Oh, and I’m also not going to buy an item that I totally don’t need or would never use…even if it’s rock bottom price.  That just doesn’t work for me and I can’t waste my effort on it; I’d rather use my time and that money on something I need and would actually use.  For example, if I have 10 bottles of shampoo and I find more on sale (yes, at rock bottom price, I’m still not going to spend $1 on another bottle….I’ll use that $1 for something else instead).

*Tip # 5. It takes time to become a Coupon Shopper.
Another rookie mistake I had to learn the hard way. When my Walmart grocery bill topped $500 for a two weeks worth of groceries and I decided I had to do something about it, I thought I needed to go out immediately buy everything I could find that was on sale.  By doing so, I probably spent more money that month on grocery items and the like than I had been spending all along.

I’m an “all or nothing” kinda person and thought that in order to make this game of couponing work that I to build shelves to hold my stockpile and also fill it in that same day!

Now that I’ve been doing it for several months, I’ve learned that it’s a process….not a one-time, get-it-all-done-in-one-day game.  It takes time and weeks to accumulate a set of coupons, learn the plays, organize your strategy and fill those pantry shelves. Start off slow and work your way into the game or it can be too overwhelming.

I’ve learned to organize my coupon time.  I don’t have to spend hours and hours organizing my binder.  If I work at it one-two hours on Sunday afternoon or even just a few minutes a day, it doesn’t have to consume all of my free time and I’ll still enjoy it.  You don’t want it to become a chore or something you dread, so figure out what works best for you to keep it fun and enjoyable.

I’ve learned that it’s easy. I know we’re taught to never say never, but I genuinely hope that I never go back to the “old” way of shopping when I didn’t really pay attention to individual item prices.  I really, really like the convenience of not running out of things we use on a regular basis.

And another great benefit I recently learned from having my stockpile was the ability to share it with others.  When friends recently made a trip to Tuscaloosa to provide food and pantry items for the tornado victims, for once, I actually had several items on hand that I could donate.  It was late at night when the mission trip was organized and I didn’t have to run out to the store (and pay full price) at 9:00 at night.  All I simply had to do was pull items from my stockpile.  I know other coupon side-liners may think that all that is an Extremist’s stockpile is toilet paper and laundry detergent, but I was able to share peanut butter, jelly, granola bars, and other non-perishable items that could actually be used.

I’ve learned that my stockpile evolves.  Again, it’s not something you create and literally leave on the shelf.  It’s constantly changing because I use what’s in it.  It’s run low several times as I’ve used what’s on hand, but it doesn’t take long to add to and fill it up again.

Here is a picture of what my current stockpile looks like.  This doesn’t include my toiletry items that I have stored away in a different closet! 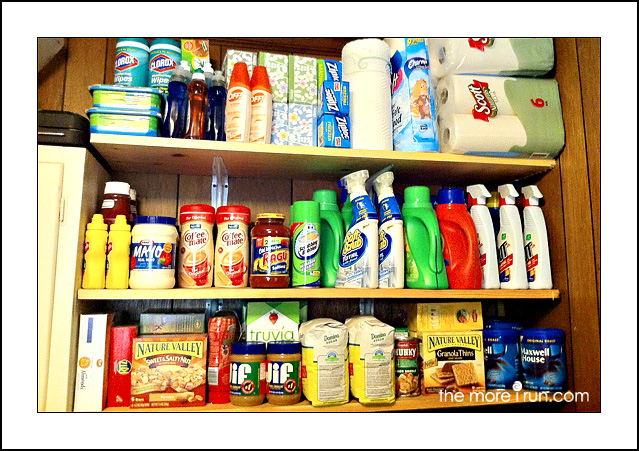 There you have it.  My game plan for coupon shopping.  Now, it’s time to create your own.  Step off the sidelines, join the game and enjoy the victory of winning your own trophy!

Here are some of my other favorite coupon posts:
Organizing my Coupons
My Growing Stockpile
My Debut as a Coupon Shopper