I set out for another run over the weekend.  But this time it was different.   I left my Garmin at home, put a compression sleeve on my right knee and hoped for the best.

But the biggest change I had is that I had no expectations.  I set no standard.  No worries about distance; I simply wanted to see if I could run.

I felt good.  No pain.  The farther I ran, the better I felt.  “So far so good,” I thought.  Clark was ahead of me and I saw him turn around at mile one.

“What are you doing I asked?” as he passed me.

It was really a rhetorical question, as I already knew the answer.  But I still wondered why as he yelled out “I’m turning around.”

I didn’t want to because I was feeling good and wanted to go on, but when I reached mile one I turned around, too.

Man, I was proud.  I was running again and enjoying it.  Enjoying it!!  Over the last week or so it had become nothing more than a disappointment.  A shoulda woulda coulda or a wished I hada.

As I neared my finish line…just before reaching mile two, I could feel the pain in my right knee again.  But as I continued to run near my driveway, I felt that runner’s endorphin high again….I had finished a complete run for the first time in a while.  It had been at least two weeks since feeling good about running.  I wasn’t concerned about my time nor training for the marathon.  I was just proud that I had just ran two miles thinking back to this time last year when I had just begun walking…never dreaming that I would ever consider myself a runner a year later.

Will I continue to train for the marathon?  Right now I’m not sure.  I’ve never trained for a marathon before so I don’t have a clue what to expect or what I should or shouldn’t be doing.  One thing I do know is that I just want to enjoy running—pain free.  If that means running only two miles a couple of times a week…then so be it.

Lunch was a hummus and roasted pepper sandwich on a roasted tomato bread with a cup of chicken noodle soup on the side.  Delicious!

And finally after four attempts I’ve settled on my new pair of running shoes.  These Brooks Ghost 4 literally feel like they hug my feet.  I may never take them off! 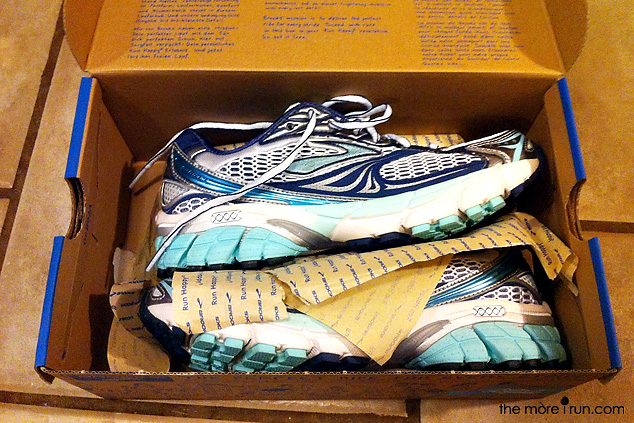 Talk to me.  What are you thoughts?