This was a fun post I recently came across and it made me smile.

Sharing my day with you.

*Up at 7 or so this morning to get ready for church; we were still late getting there despite the early efforts.

*Left Joseph at home sick this morning…on the toilet (is that too much information)?

*Went to Church Service then called home to check on Joseph before going to Sunday School. He’s still on the toilet.

*Home from church and immediately start stripping down into more comfy clothes. (I’m thinking that may be a little TMI too, but you all know you do it, too).

*Made Broccoli Soup for lunch…super easy and quick…yell at me and I’ll send ya the recipe.

*Put a load of laundry in the washing machine.

*I can’t eat the soup because of the dairy, so I cook my own separate lunch of chicken breast, sauteed veggies and couscous (I’ve been watching too much Food Network). Make a double portion for my lunch tomorrow.

*Pack my lunch for tomorrow.

*Eat my lunch while reading the Sunday paper. Clark’s asleep on one end of the couch and Joseph’s on the other (he’s off the toilet now). Shelby’s cleaning her room (again) so the quietness around the house is nice, along with the sunshine peaking in the kitchen window.

*Clark gets up to eat lunch. I take his place on the couch.

*Watch a few episodes of “Into the Pride” about a man who goes to Africa for six months to live with the lions. Now I want to go to Africa.

*Doze off to sleep for about an hour and dream of going to Africa one day.

*Put a second load of laundry in the wash.

*Shelby’s still in her room. I wonder if she’s really cleaning it or just hanging out in there? Teenage girls do that ya know…just hang out like that. Alone.

*Cook lunch for Joseph. No, he doesn’t want the Broccoli Soup (he’s afraid it’ll make him sick again). I cook eggs and couscous for him. I secretly try to hide the couscous under the eggs, but it didn’t work. He fussed and said that I tried to feed him deer corn. My family just doesn’t appreciate the taste I have for gourmet food.

*Shelby emerges from her room only to ask, “When is it going to warm up?” to which I reply, “probably July”, to which she replies, “well, that’s stupid” and disappears to her room again.

*Start cooking supper: Spaghetti and Meatballs (I’ve got the recipe for that one, too…aka Prego or Bertolli’s or whatever you prefer). I don’t normally cook on Sunday night, but I like leaving food cooked for my fam to eat while I’m at work and it also gives me lunch options for the next couple of days.

Shelby: “what are you cooking?”

Me: “Spaghetti and Meatballs”

Me: “no, I want them crispy like that on the outside”

Shelby: “can I throw a spaghetti noodle on the ceiling?

*Fold the second load of laundry.

*Finish up supper and wash dishes again, hopefully for the final time tonight.

*Set the coffee pot for 4:55 a.m. and as I turn out the lights for the night, I realize that life’s not all about having dishwashers.

It’s been a good day. 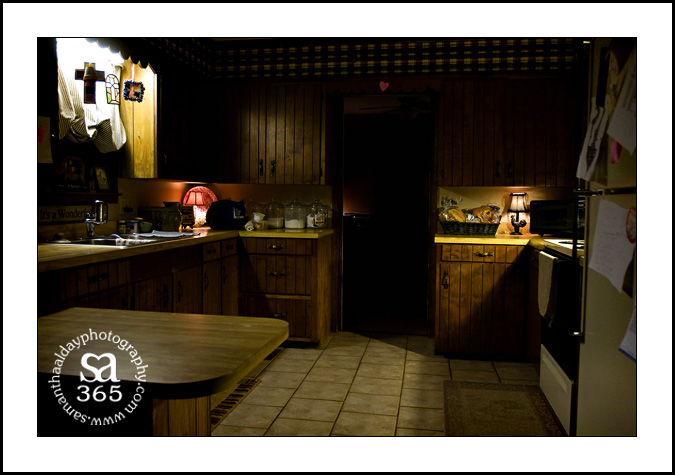