How ironic that the only answer to my recent Facebook question, “what do you want me to blog about” would be about starting over.  I think it’s actually harder to start over at doing something instead of doing it for the first time.  When we are starting something new and fresh, we’re usually excited and are ready to start with much anticipation.  But starting over?  That’s something totally different.  Because we are actually starting over, we’ve been there, done that and the standard is set.  But when are challenged with starting something again, we’re faced with a fear of being able to accomplish that goal again~we will be able to do it~how will we do it~will I meet that expectation?

As weird as it sounds, that’s the exact place I’m at with blogging.  It’s been three months since my last blog post and it feels really strange to sit here and blog right now.  And because I’ve not blogged in so long, I’ve honestly gotten out of the habit of thinking like a blogger.  I don’t take pictures much anymore or when I think of taking a picture, it’s usually too late and I think, ‘that would have been something I could have blogged about.’

The recent death of my father in law has impacted my family beyond any words I can attempt to write here.  I’ve thought about the day it would happen for the last three years since his diagnosis with lung cancer.  I wondered how I would handle it and prayed fiercely that God would help me to help my husband and my children go through the hardest pain I knew that any of them would ever experience.  And even though it’s been two months since his death, it’s strange to be blogging again now.  It’s almost a sense of guilt that ‘life goes on’.

But here I sit.  Starting over.

And to answer Mandy’s question about getting motivated to start over, the only real answer I have sounds cliche’ and trite, but it’s simply to just do it.  For these last few months, you can bet I haven’t exercised or ran because I’ve been motivated.  There have been plenty of days where all we’ve wanted to do is sit inside a dark room and wallow in the pain and hurt, but we knew that wasn’t the right thing to do either.  We’ve starting exercising and running again because it’s what we needed to do.  It’s something we just have to push through…and sometimes the motivation doesn’t come until after we start. 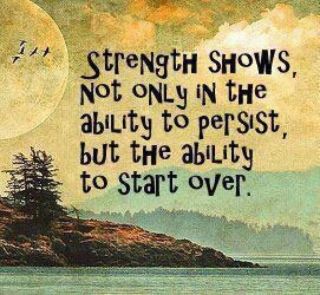 7 comments on “On Starting Over”