Uhhhh…yes, you read that correctly.  Little ‘ole me, from a little spot on a country, dirt road, featured in a national magazine.  Can you say cra cra!?

Several months ago, a freelance writer from Better Homes and Gardens magazine emailed and asked if she could write a success story feature about me running my first 5k after 40?  Being the skeptic I am, I had to do some internet searching to make sure this was legit.  Wouldn’t you?!  ‘Cause here’s a reminder…it’s just me and my husband who run together a few times a week on a country dirt road..simply to get some exercise and spend time together.  I’ve never even considered myself a “real runner”.  I don’t run fast, I don’t run very far and I don’t have a wall decorated with hundreds of running bibs and medals.  Again, this is just me we’re talking about here.

So after realizing this was the real deal, I obviously obliged her request and we set up a phone appointment for an interview.  Have I mentioned how crazy this is!?  During the interview I felt like I rambled on and on, making no sense whatsoever, to which she reassured me she wanted to know as much information as she could learn so she could write a complete story.  And after 45 minutes she probably found out more than she want evvvver wanted to know about me!  🙂

So, if you have a extra minute or make a trip to the bookstore, and if you wander on back to the publications section, you may find an article about a 40 something year old woman who runs.  Yes runs. Even if it’s slow, even if it’s not very far and even if it’s just on a dusty old dirt road.

[Tweet “The More I Run featured in Better Homes and Gardens Magazine!”] 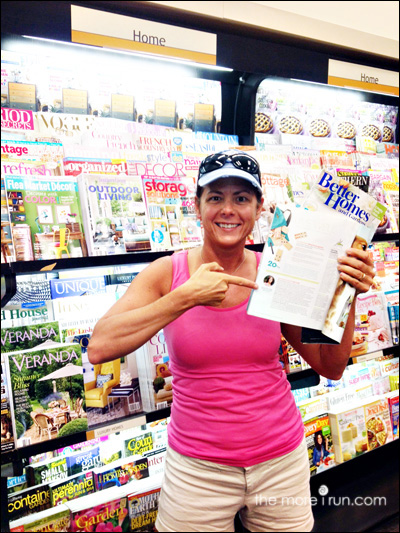 6 Comments on Featured in Better Homes and Gardens Magazine