I thought at the start of day 2 of filming that I wouldn’t be as nervous as I was at the start of day 1.  But oddly enough, I was almost just as nervous.  We would start an hour later this morning (probably because it was after MN before any of us got to bed after filming day 1), but after the few weeks of anticipating and waiting for these strangers to ascend upon my space, my hood, my home, I was a bit nervous!

Would all the hard work I had done cleaning, freshening up as best I could, be impressive enough?  I mean really.  This was a commercial we’re talking about and the world was about to see my 1970s, yellow laminate kitchen for heaven’s sake!

The full crew arrived right at 8 and I was dressed in my running/workout clothes just as Lauren had requested. We started with my workouts centered around my picnic table.  This is something Lauren had mentioned quite often as it really resonated with the theme of simple fitness of the ad.

By the time we made our way outside, along with passing around the can of mosquito spray, it was closer to 9 and my nerves had pretty much settled.  We were laughing already and I was enjoying the company of my new friends.

I was afraid it would be really hot for us, but thankfully we were under a huge oak tree which shielded us from the sun quite nicely.  While I wasn’t really nervous anymore, this was a bit weird to exercise (on a picnic table) in front of 3-4 people.  I mean seriously, this is someone who rarely works out in front of anyone, much less an entire crew! 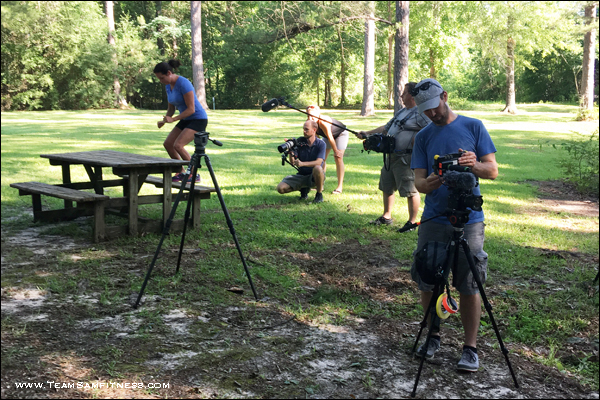 From there it was the same scene: mountain climbers this way then that, triceps dips and push ups….then sit ups and more push ups from atop the table.  Then entire shoot around the picnic table took a little over an hour.

After breaking and a touch up of my hair and makeup (yes, Laura, the makeup artist was there, too), we went back outside to my long dirt drive for me to run.  As I would run to here, run to there, then come back and run again, all I could think of is that split screen image I know you’ve all seen before where one picture portrays how you think you think you look and the other is how you really look.  Yep, that was definitely me.

As I was running, a car came up my drive.  It was a Nestle’ representative from New Jersey to observe how the filming was going.  I tried not to get nervous again, but it’s hard because all I could hope was that I said the ‘right things’……like there really is any right thing to say.  Just be myself and share my story is what kept coming back to mind.

We took another 10 minute break or so then Lauren and I walked my driveway (off camera-maybe) to the actual dirt road, while the others all piled in the back of an SUV with their gear and met us there. 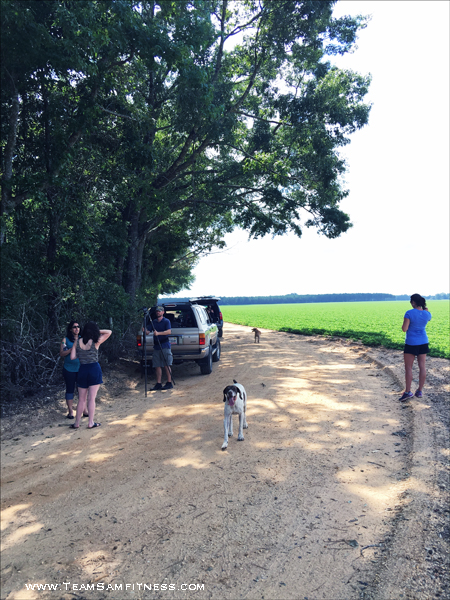 This was the same scene as the others, but I think this one was my favorite.  For one, I love to run, but more so this…today…filming at my lil ole house in Leroy on my dirt road, is too surreal for words.  Who would have ever thought that us running on that road just to get in better shape would lead to such as this.  We’ve ran that road so many times we know if there is even a rock out of place.  We know each mile marker on that dirt road and every person who lives there.  Most days other than the tractor in the field, we never pass a car.  It’s just us and the dogs.  But now here we are.  My story.  Our story being told and making a difference.  Yes, it’s very surreal indeed.

I ran and I ran and I ran…well not really ran because I had to run “tv slow” for the cameras so at least it was not very tiring as running can be. 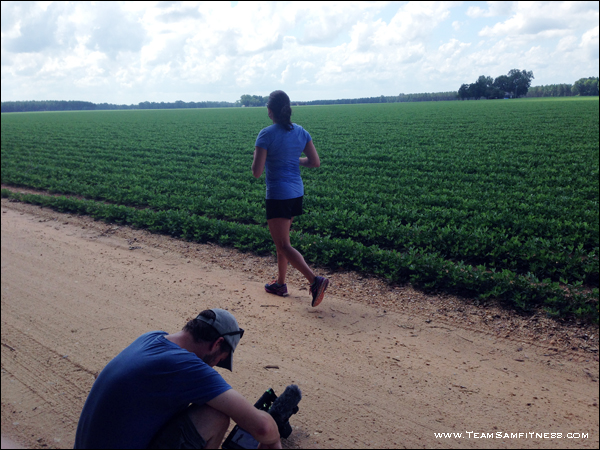 After finishing my run, it was back to the house for a complete wardrobe change and makeup and hair.  It was time for more interviewing and blogging.  I didn’t realize I’d be “blogging” on camera again and Lauren decided the light was best in my living room….which required the furniture to be shifted a little.  I tried really hard not to pay attention to the dust that I had missed under the furniture!  Who dusts under there anyway because it’s usually not ever noticed!  But they didn’t seem to care so I didn’t either…. 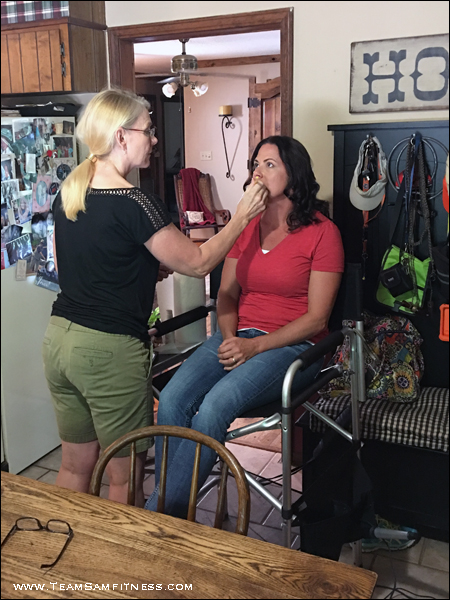 By the time we finished with that round of interview, Liz had returned with the makings for sandwiches and salads.  As I was hanging around inside the house while everyone was making their way out to the picnic table for lunch, my Boo walks in the door to surprise me.  I’m tearful now just thinking about her getting off work an hour early and driving an hour home to check on me.  Any anxiety or nervousness that I had left immediately left me and I hugged her hard.  It was all good from there.

Lunch was relaxing and the weather was still perfect for sitting outside.

After lunch was more interview time, but this time on my front porch in my rocking chair.  This was more than appropriate being I spend so much time out there sitting, drinking coffee and talking on the phone.  And that’s exactly the picture Lauren wanted to film.  As I sat on one end of the porch, Shelby sat on the other off-camera.  I was told to pretend I was texting…as if I was texting a client (because that’s exactly what I do), so naturally Shelby and I were texting each other!!  Lauren laughed and realized what we were doing and asked Shelby to come sit with me.

With that deer in the headlight look, she did just that and we sat there together, rocking and talking.  Lauren began to ask her questions about me and me of her and as eloquently as if someone speaking on the stage of Miss America, Shelby answered her questions about me that has made me the most proud of anything that could have become of this opportunity.  By the end of that interview we were both crying as we shared just what we both meant to each other and how proud she is of me and I of her.  A moment I will cherish forever. 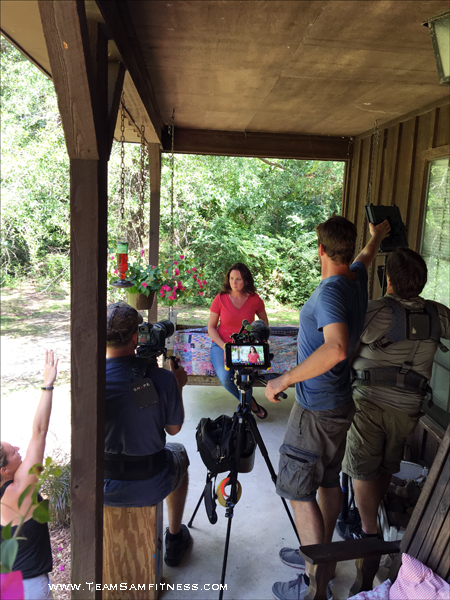 We broke for another break then finished up with a final 20-30 minutes or so of interview.  I found by this point, Lauren was having to prompt me more and more and with her final question she asked was there anything else I’d like to share or talk about that I haven’t already mentioned.  Not quite as eloquently as Shelby, I stared at her with a blank stare and said, “nope, I’m empty…I’m fresh out”.

We laughed and that was a rap. 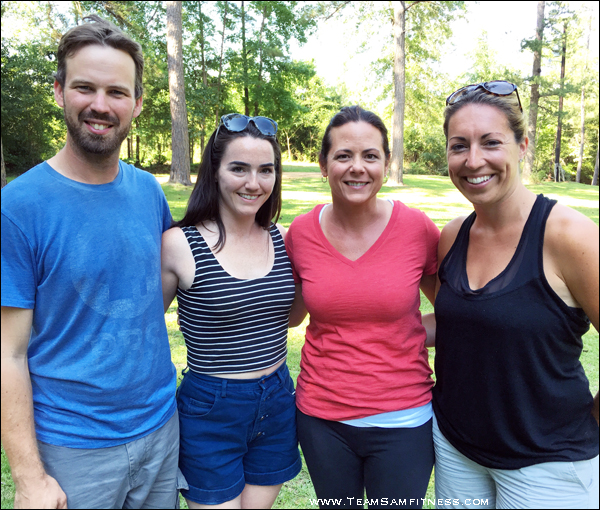 Thanks for sharing my experience with me! You’ll be the first to know when the video is released!  🙂